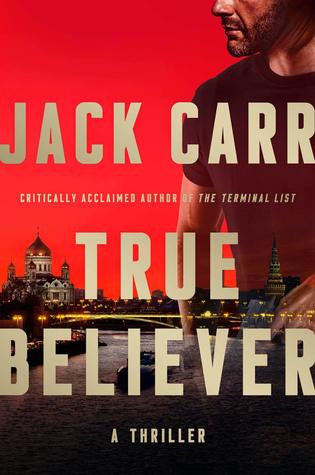 So I listed the Terminal List as one of my favorite books in 2018. The debut thriller from Jack Carr was one of the best firsts in a series I have ever read. His second book, True Believer just came out and I was worried that it wasn’t going to live up to the Terminal List. I had no cause to worry. True Believer is pure rocket fuel.

The last time we saw James Reece, he was traveling via sail boat away from where he brought down a large government conspiracy to avenge the deaths of his wife, child, and teammates. Reece ends up in Africa at the game preserve of his friend’s uncle. He works there and is enjoying the life of a guide when a former teammate shows up. But he hasn’t been ordered to kill or capture Reece, he has come with an offer- work to dismantle a terrorist cell led by a former Iraqi general and be pardoned by the President, along with all his “accomplices,” or suffer the consequences. Reluctantly, Reece accepts the offer.

This sets off one of the best cat-and-mouse thrill rides I have ever been on. Is Reece going to find the Iraqi and the rogue CIA officer? Is he going to die from a brain tumor that has been festering? Will his friends survive? Those are all questions I am not going to answer here. It would take away the insane amount of fun you will have reading this book. It is tightly plotted and well paced. I really only have one complaint about the book, but I can’t discuss it here because it’s a spoiler, but if you have read the book, you absolutely know what I’m talking about.

I like how Jack Carr brings some of his real life struggles to the page without being obvious about it. In fact, I wouldn’t have known he did so if I hadn’t heard him on the Jocko podcast. And while the book is a thrill ride, my favorite section was when Reece was on the game preserve. The description of tracking the elephant will stay with me a long time. Jack Carr has the same gift as Lou Berney – he shows, he doesn’t tell. It’s rare and it’s beautiful. I cannot wait to see what he has in store for James Reece and us next. Do yourself a favor and read the Terminal List and True Believer. They are fantastic books. written by a gifted writer.