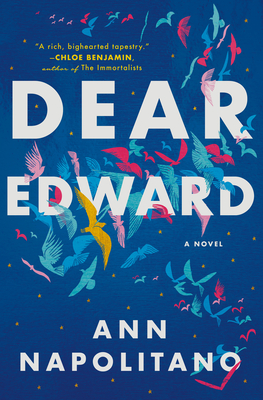 I don’t know what you are going to be doing on January 14, 2020, but if you are a reader, you should be buying a copy of Dear Edward by Ann Napolitano. I have not felt like this about a book since November Road by Lou Berney. And though the two books are about vastly different subjects, they share one thing in common – writers with a gift for language.

Edward Adler is the lone survivor of a plane crash that kills is family and 188 other people. He goes to New Jersey to live with his aunt and uncle. Edward’s physical and emotional recovery from the crash are painful and difficult, but made easier by his new next door neighbor’s daughter, Shay. Edward takes to sleeping on Shay’s floor at night.

Edward discovers, one sleepless night, his uncle John’s spot in the garage. Edward finds folders full of information from his ill-fated flight and two duffle bags secured with combination locks. Shay and Edward open the bags and find hundreds of letters sent to Edward after the crash. He reads the letters. He and Shay catalog them and decide who they’re going to respond to. The letters provide some closure for Edward and he and Shay make a plan.

This book was utterly amazing. When I say Ann Napolitano has a gift for language, this is what I mean. Edward has tracked down his brother, Jordan’s girlfriend. “Thank you, he thinks, and watches her turn and walk through the deli door. He watches his new life walk into his old life.” It’s a two sentence paragraph and it has been sitting with me since I read it. Near the end of the book, she writes, “Edward closes his eyes. He is the boy buckled into a plane seat, gripping his bother and father, and he is the young man sitting on the ground that plane crashed into. Eddie, and Edward.” Those are just two examples of her beautiful prose. The book is full of prose like this. It’s such a pleasure to read that I was finding myself putting it down so it would take me longer to finish so I could savor the story and characters and writing just a little bit longer.

The characters are rich and so well-drawn. They are complicated and three dimensional. I wish that she would have spent a little more time on Edward’s aunt, Lacey. She is one of the most important characters, but I feel like she is the least developed. That is really the only criticism I have of this book. It is one I’m going to pick for book club and it is one I will definitely revisit. Do yourself a favor and buy this book. Read it. You will not regret it.

I won this book from goodreads and received no compensation in exchange for this review. The opinions expressed herein are mine and mine alone.