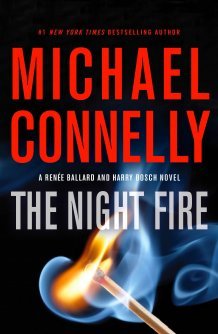 I read somewhere that Michael Connelly is the Raymond Chandler of our era. I actually think he’s even better than that, and The Night Fire is proof. Connelly brings Bosch and Ballard back together to solve two seemingly unconnected murders. This book has it all-suspense, plot twists, and damn good police work.

The book starts with a cameo by Mickey Haller. Mickey is defending a schizophrenic man who is charged with killing a judge. Bosch finds evidence which leads to the man’s acquittal. This enrages the detectives working the case. They refuse to admit someone else may have committed the crime. Meanwhile, as Bosch starts working to find who murdered the judge, he receives a murder book from his former partner’s wife. It was a drug murder that occurred years ago.

Ballard is working the death of a homeless man who was immolated in his tent. Ballard finds out the seeming accident is a murder and begins to investigate, putting herself in the crosshairs of her former boss, Captain Olivas, who sexually harassed her. The beauty of this book is how the threads of the plot weave together seamlessly and organically.

The thing I love about Connelly’s writing is how effortless he makes it seem. His legal and police procedures are spot-on. He does his research. But more than that, Connelly uses location as character. His descriptions of LA, the way he weaves Bosch’s memories from old cases into the new books, is just amazing. It’s like reading a real person’s thoughts. It is a gift and it is what makes Connelly unmatched in this genre. I try to read the books slowly so I can savor the language and admire the skill, but alas, I always find I’ve reached the end too soon.

I love Bosch and Ballard’s partnership. They are smart and savvy and compliment each other’s investigative skill. I cannot wait to see what Connelly has in store for them next. Do yourself a HUGE favor and read The Night Watch. Even if you are new to the Bosch/Ballard books, you will not be disappointed.