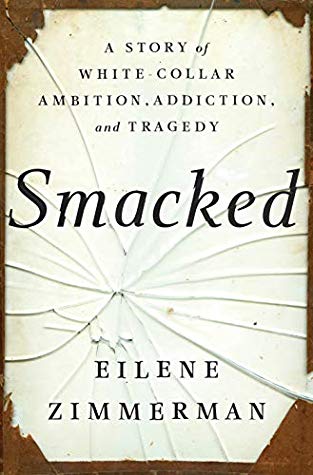 Eilene Zimmerman met her husband, Peter, while while she was looking for a job and he was working at a temp agency. It was not love at first sight, but she came to fall in love with him She moved with him to a small town in upstate New York so he could get a master’s degree in Chemistry. After working in the field, he decided he wanted be to be lawyer. He completed law school and they moved t San Diego.

Their marriage didn’t last. But Eliene and Peter were congenial and co-parented their children. Eilene noticed that Peter was looking ill. He’d lost weight, his hair was thinning, his behavior was erratic. It wasn’t until after she found him dead on his bedroom floor and the coroner reported the cause of death that she realized he was severely addicted to drugs. She felt enormous guilt for not realizing that he had a drug problem and also for not going to his house sooner to check on him.

The book has four parts. I was most intrigued by the third part, in which Ms. Zimmerman discusses drug use and addiction among middle class and upper middle class members of society. What experts are finding is truly scary. And the solution is truly simple. We need a better community. We are too good at being disconnected. We prefer text messages and social media to real, genuine connection with people. I used to tease my son for not having facebook. Now, I’m glad. He has social media, but he doesn’t spend all waking hours on his computer or phone. He plays baseball and hangs out with friends and isn’t afraid to spend time with family. We need more kids like that.

Perhaps the hardest part of the book – for me – was when Ms. Zimmerman writes about the immediate aftermath of finding Peter’s body. The call to 911, the police, EMTs, and later the medical examiner coming to his house. Her having to call her kids and have them come to Peter’s house so she could tell them she died. Her son’s reaction to the news broke my heart. There is a particular reason why he’s so upset, but I don’t want to spoil the book for those who want to read it. Kids internalize so much of what their parents do to them. It was really sad. The fact that she and her kids are strong and happy made me feel better.

I don’t want to say I enjoyed this book because the topic isn’t enjoyable. But I will say, I like the way that Ms. Zimmerman writes, with tenderness and sensitivity, but also without making excuses or glossing over the parts that do not paint her in the best light. I remember reading her article about her husband’s death in the New Your Times and I am glad I got the opportunity to read the whole story here. I learned a lot from reading this book and am better for having read it.

I won this book from Goodreads and received no compensation in exchange for this review. The opinions expressed herein are mine and mine alone.